Some of the African American History in Oak Ridge

Some of the African American History in Oak Ridge

The Oak Ridge 85 or the Scarboro 85, depending on your preference, has recently come to prominence as a result of the efforts primarily of Rose Weaver, John Spratling and Martin McBride as well as several others who have contributed. It is a worthy effort to recognize the integration of Oak Ridge High School and Robertsville Junior High School on September 6, 1955.

This event was actually the first integration of public schools in Tennessee as well as the deep South. I find evidence of only two other schools in Arkansas and a private school in Nashville that had integrated by then. Clinton integrated in 1956 and Little Rock in 1957.

The Scarboro School with grades one through six continued to operate as a community school until 1967. Arizona Officer was the well-respected principal. Having been closed in 1942 along with all other schools in the area required by the Manhattan Project, Scarboro School was opened again in March 1944 and was used for white students. It was later used from September 1946 to June 1949 as a black elementary school.

According to Alden Blankenship, who was superintendent of Schools during the Manhattan Project, in “An Adventure in Democratic Administration,” Scarboro School was selected as the location for the black school in September 1946 when it became obvious that the black population was required by state law to be educated in separate schools, was in need of a school.

During the Manhattan Project years, 1943 – 1946, no black children were allowed to live in Oak Ridge. See the rapid changes taking place. By 1946, black families were being allowed to move into Oak Ridge, obviously.

In June 1949, the black students were moved to the school in Gamble Valley that had been a white school but with the creation of the all black neighborhood there, the school was located closer to the black community. It retained the original name of Scarboro School and thus the reason for the name of the community becoming Scarboro Village.

While the integration of Oak Ridge schools in 1955 was implemented without the kind of protest brought about in Clinton by the outside negative influence of John Kasper and Asa Carter that happened in 1956, integration in Oak Ridge was not without some negative resistance. The person who was most profoundly impacted by this small but vocal resistance may well have been Waldo Cohn.

Cohn was a scientist who personally worked to create and ship the first medical isotopes generated by the Oak Ridge National Laboratory’s Graphite Reactor and who is credited with starting the Oak Ridge Symphony Orchestra as its founder, organizer and first conductor. He was also the Chairman of the Oak Ridge Town Council during the most tumultuous time of the early to mid 1950’s.

His resolution of December 1953, to desegregate Oak Ridge schools, created a firestorm of controversy. Passed by a vote of four to two, the town council soon found itself under attack, but the primary target of the segregationists was the chairman, Waldo Cohn.

Letters to the editor, phone calls containing threats and general displeasure with the resolution led the council members to back down from their position of support for integration, but not Cohn. He stood firm.

An insight into the turmoil can be seen in the handwritten letter Cohn sent to Howard Baker, on February 1, 1954, it begins,

“Dear Mr. Baker, Perhaps, you have heard about our tempest-in-a-teapot here in Oak Ridge, stirred up by the Council’s school integration resolution of December 21, 1953…”
Cohn went on to say, “As matters stand now, there is to be a recall election on me next Monday. The petition was started by anti-integrationists and others who don’t like me in any shape or form. Subsequently some of these banded together in a little group (less than 100 for sure) calling themselves the Citizens Action Committee.”

The upshot of the recall election was that while there was a majority of votes for recall (rumored to have been helped by people outside Oak Ridge coming in to vote) it failed to achieve the necessary two thirds majority. Cohn kept his seat on Town Council.

According to an article in The Oak Ridger of Jan. 21, 1974, regarding activities in 1954, Kit Kuperstock states, “Though 3,356 voted in favor of recall, with only 2,061 supporting Cohn, this was still short of the two-thirds majority necessary and Cohn kept his seat. He chose to resign as Council chairman, however, and Cliff Brill was elected to replace him. Jerry George was elected vice-chairman.” The number voting was far larger than the number who voted to elect the town council.

The council had passed another resolution negating the first integration resolution and calling on Oak Ridge to wait for the state of Tennessee to create guidelines for integration before integrating its schools. The pressure of the Citizens Action Committee was obviously being felt by the town council.

Yet, when Brown versus the Board of Education was ruled upon in 1954, the Atomic Energy Commission issued a directive in January 1955 to integrate Oak Ridge schools. While only the Oak Ridge High School and Robertsville Junior High School had black students enroll, the ruling applied to all schools.

Because of the continued segregation of the neighborhoods, it was in 1967 before black students enrolled in any other Oak Ridge schools. The Scarboro School was closed at that time.

Permanent teachers then replaced the volunteers, enrollment grew and by 1955 Scarboro High School, located in the same building with the elementary grades, graduated 15 seniors. The school’s enrollment was growing and the need for integration of Oak Ridge schools was apparent to many who lived in Oak Ridge, but surely not all.

It may be that this early community support for Scarboro School that culminated in the first black high school in Anderson County resulted from the Letter to the Editor written by a 14-year-old white boy. I would like to find that letter to the editor…

A significance of that early 1950 effort is that the area churches contacted churches in Scarboro Village and between the several churches involved, the volunteers were found, and the high school teachers engaged to form the high school. If this is correct, this is a good example of collaborative efforts of churches in Oak Ridge.

The 65th anniversary celebration this past September 2020, was certainly an excellent series of events and historical markers are now in place and more are in the planning stage. This recognition of the 85 individuals who were pioneers is overdue for sure, but good to see happening now and annually in the future. 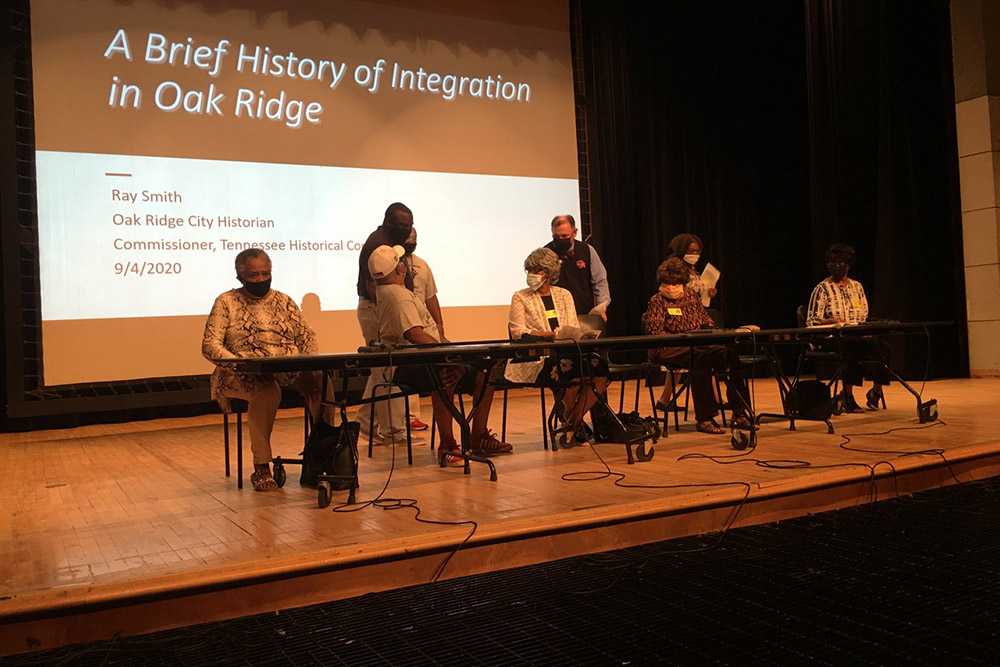 The 65th Anniversary of Integration in Oak Ridge began at the Oak Ridge High School with a series of talks and continued throughout the day at various locations concluding at the location of the original Scarboro School. 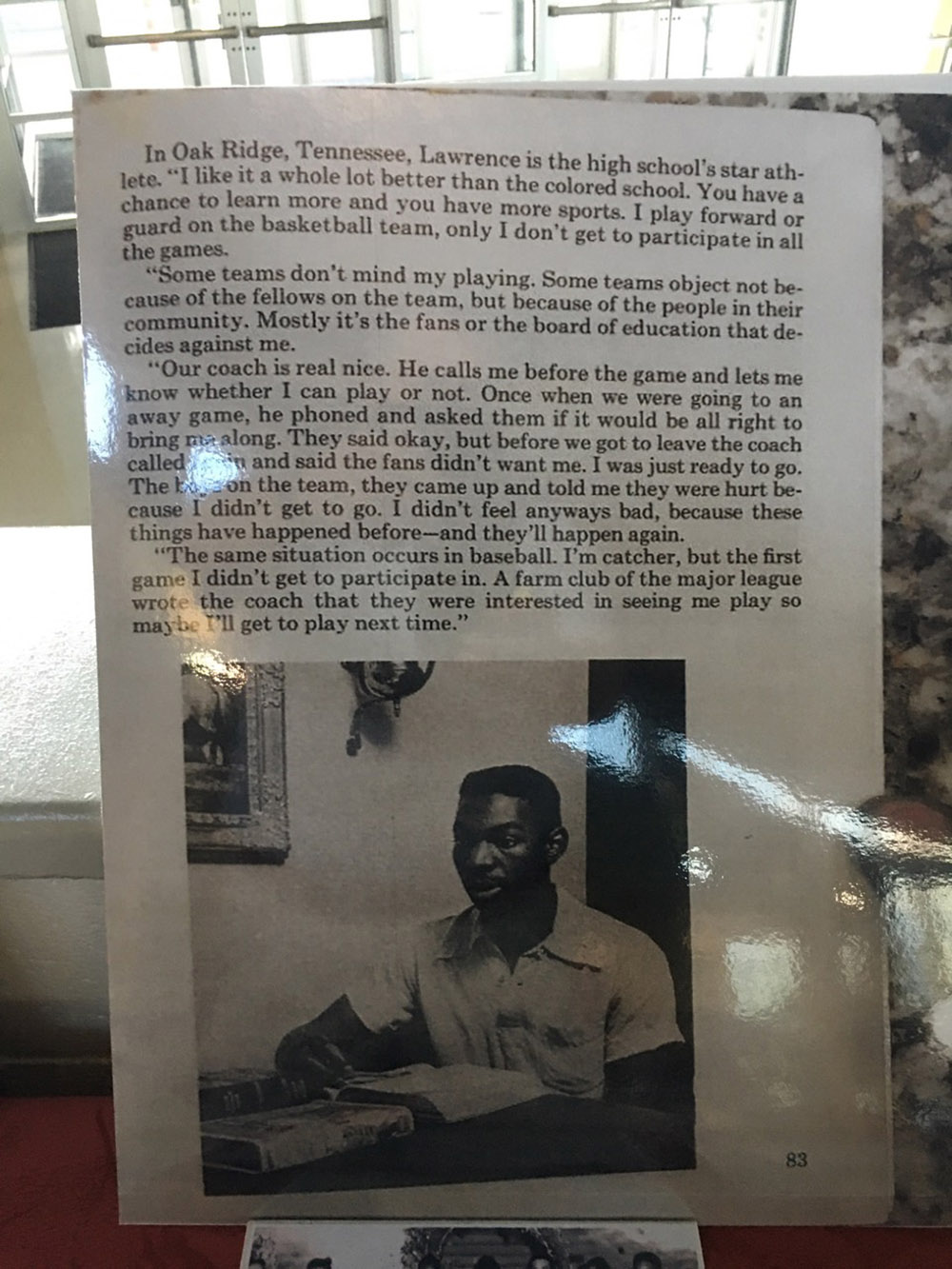 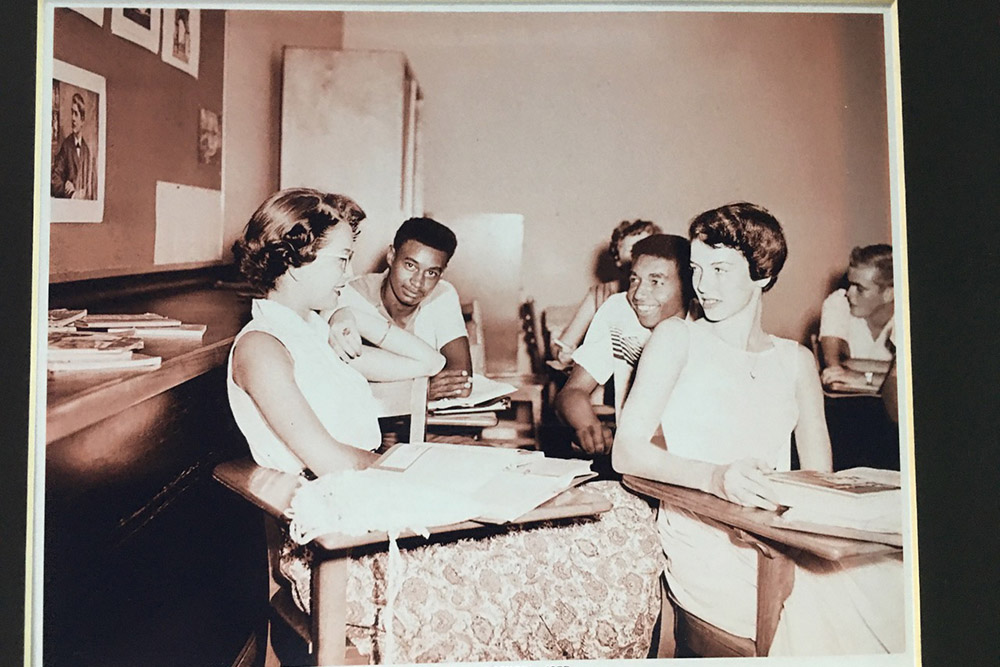 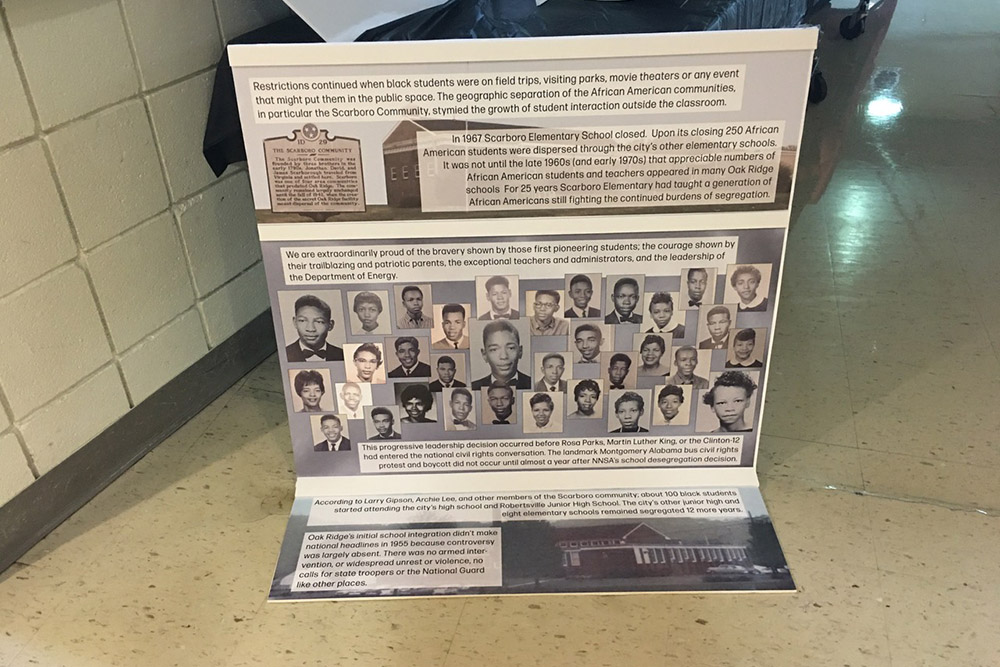